Project Summary: Research revealed that aquatic invasive species are potentially being sold to anglers as live bait. The researchers are working with agencies, bait shop owners, and anglers to develop a monitoring and public education campaign to prevent the spread of invasive species through the bait trade.

Location: Region-wide (samples were taken from every Great Lakes state).

Description: One possible pathway for invasive species like Asian carp to enter the Great Lakes is the commercial bait trade. Anglers purchase live bait fish to catch larger predator fish. At the end of the day, it’s not uncommon for anglers to release unused bait fish into the water. If any of those fish are non-native, it can lead to the establishment or spread of invasive fish—which can wreak havoc on native fish and their habitat.

Baitfish, such as the fathead minnow, are generally reared to adulthood in wholesale facilities or in fishponds. Many of these rearing sites occur near areas infested with invasive species, including Asian carp. During floods, juvenile carp can enter rearing sites and go unnoticed amongst the thousands of adult baitfish. The carp may then be unintentionally transported to bait shops across the country, from which they are brought to local lakes and rivers by anglers. Despite the potential threat from this vector, the volume of invasive fish entering the Great Lakes through the bait trade is largely unknown. 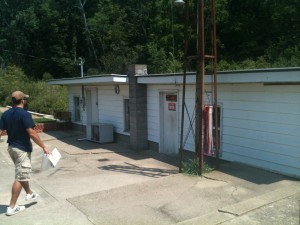 Thanks to a grant from the Great Lakes Restoration Initiative, researchers from the University of Notre Dame and Central Michigan University have collaborated to quantify the prevalence of invasives in the bait trade. The researchers collected samples of tank water from 525 bait shops across the Great Lakes states of Minnesota, Wisconsin, Illinois, Indiana, Michigan, Ohio, Pennsylvania, and New York. They then genetically screened these samples for the presence of six invasive fish species (bighead carp; silver carp; round goby; tubenose goby; rudd; and goldfish) by searching for their unique DNA sequences amongst the environmental DNA, or eDNA. eDNA screenings are much more efficient than traditional visual screenings, and make searching for individual juvenile invasives amongst thousands of minnows feasible. 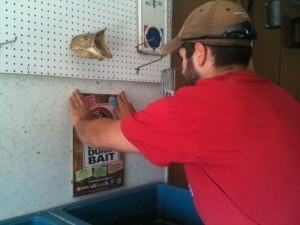 Out of the 525 bait shops sampled, goldfish were detected in 13, round gobies in 8, tubenose gobies in 3, silver carp in 3, and rudd in 1. Bighead carp was not detected in any of the bait shops sampled. These results indicate that while the issue does not yet appear to be widespread, some invasive fish species are being brought into Great Lakes bait shops. When the presence of invasives was detected and confirmed, the researchers contacted both the U.S. Fish and Wildlife Service and the relevant state agency, which then followed up with the bait shops. Researchers are working with agencies to develop regular monitoring systems. The researchers also developed a public education campaign with the Illinois-Indians Sea Grant to help bait shop owners and their customers prevent the spread of invasive species. The researchers hope the development of regular monitoring and an informed public can close off one more pathway into the Great Lakes for harmful invasive species.

Approximate cost of project: $276,150, which was provided by the Great Lakes Restoration Initiative.

Results and accomplishments: Out of the 525 bait shops sampled, goldfish were detected in 13, round gobies in 8, tubenose gobies in 3, silver carp in 3, and rudd in 1. Bighead carp was not detected in any of the bait shops sampled. These results indicate that while the issue does not yet appear to be widespread, some invasive fish species are being brought into Great Lakes bait shops. Federal and state agencies are developing monitoring programs to prevent the establishment of invasive species populations. Researchers identified a high potential to increase anglers’ awareness of invasive species and prevent practices such as dumping the remainder of bait buckets into the water at the end of the day. Anglers support healthy populations of native fish, and they can play an important role in preserving the integrity of natural ecosystems.