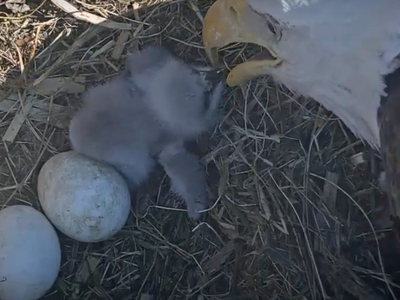 Of the three bald eagle eggs laid at the University of Notre Dame’s Linked Experimental Ecosystem Facility (ND-LEEF) in St. Patrick’s County Park, the first hatched on Monday, March 29, 2021. The other two eaglets are expected to hatch in the coming days. The parents, a pair of bald eagles, which claimed the former red-tailed hawk nest in 2015, began laying the three eggs in mid-February.

The world has been able to view the bald eagles and eggs via an in-nest eagle cam mounted in the tree above the nest. Installed in fall 2017 at ND-LEEF, the camera allows viewers to watch as the nest is built, as the eggs are being laid and incubated, and as the eaglets hatch and reach the fledging stage. The eaglets are expected to leave the nest at the end of the summer.

“It’s the seventh year of having eaglets hatch in the nest, and we are excited to have another opportunity for eagle cam viewers to see lots of development activity over the spring and summer months,” said Brett Peters, assistant director of ND-LEEF. “Additionally, this year I will be speaking virtually with local students about the eagles in South Bend and educate them on the growth, diet, habitats, and protection of eagles.”

In September 2020, ND-LEEF finished the construction of two new watersheds, which originally began in the fall of 2019. The watersheds were shifted about 300 feet east of where they were initially planned to minimize any disturbance made to the nesting locations of bald eagles that return to ND-LEEF each spring.

The new watersheds are nearly identical copies of the other two watersheds on site, consisting of interconnected ponds, streams, and wetlands. However, a new valve structure will allow for five additional flow options for how the water may move through these new watershed systems. This allows researchers to have more options for the water flow systems they may want to mimic for various experiments, and will also allow for more simultaneous research and increased scientific replication of field settings. All watersheds on site can link or separate the pond, stream, and wetland ecosystems to control how each ecosystem flows from one to another.

ND-LEEF is a globally unique research facility, supported by the Notre Dame Environmental Change Initiative, that houses two engineered experimental watersheds, each consisting of an interconnected pond, stream and wetland. Scientists use ND-LEEF to conduct experiments in a field-like setting but in a more controlled environment than one can find in nature. Both experimental watersheds are roughly the length and width of a football field and located five miles north of campus on six acres of land within St. Patrick’s County Park.

To watch the live, in-nest eagle cam or to learn more about the ND-LEEF eagles, please visit environmentalchange.nd.edu/eagles, which now includes nest video highlights, facts about eaglet development, and more. Fans of the eagle cam are encouraged to share any exciting nest activity by using #NDEagleWatch and by tagging @NDLEEF on Twitter.