Read the original article in the Toledo Blade 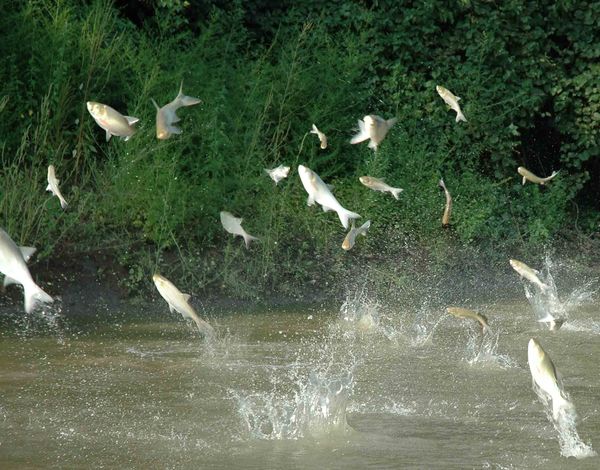 SOUTH BEND, Ind. -- Under the protective gaze of Touchdown Jesus, scientists inside the Life Sciences Center here on the Notre Dame campus were examining water samples from Lake Erie last week, hoping they would never find what they were looking for -- evidence of Asian carp DNA.

Then that troubling moment arrived, when environmental DNA (eDNA) from these feared invasive fish showed up in multiple samples -- those taken in the Ohio waters of Lake Erie in Sandusky Bay and others from northern Maumee Bay in Michigan waters.

"This is just one indication that the carp might already be in the lake, but it's certainly the news we all dreaded hearing," Rick Unger, president of the Lake Erie Charter Boat Association, said Saturday.

Chris Jerde, a Notre Dame researcher who helped develop the eDNA tracking technique used in the studies, is part of a team of biologists, mathematicians and graduate students who had been sleuthing their way through thousands of water samples. Inside a nondescript brick building that sits on the sprawling campus, between that iconic mural on the side of the library, and Notre Dame Stadium nearby, they came across the carp's microscopic markers.

"Our worst fears came true with these findings," Jerde said. "I'm upset about it, but not shocked at all. Nobody wanted to see this day come, but I think we all have to admit it was a real possibility."

Once a backup round of tests confirmed the presence of Asian carp eDNA -- the fingerprint the Notre Dame scientists contend fish leave behind when they are present in waterways -- officials in Ohio and Michigan and at the federal level were notified late last week.

Fisheries personnel from the Ohio Division of Wildlife immediately began netting and electro-shocking in Sandusky Bay, but none of the invasive Asian carp were found. Additional testing and monitoring of both the Ohio and Michigan waters of Lake Erie is planned by both states and a number of watchdog agencies.

"The results from these water samples are certainly concerning," he said. "Protecting the Great Lakes from the threat of Asian carp is critical to the health of our sport and commercial fisheries and to the quality of life in Michigan."

The Lake Erie samples that indicate the presence of Asian carp were taken last August as part of a broad-scoped look at the Great Lakes watershed that involved more than 2,000 tests. Ohio, Michigan, the U.S. Fish & Wildlife Service and the Nature Conservancy all partnered with the Notre Dame lab in the effort.

Samples collected from Lake Michigan were examined first, since the supporting groups deemed that area was the most vulnerable to an invasion of the carp, due to the presence of large numbers of the fish in the Illinois and Des Plaines rivers, just below an electrical barrier in Chicago that is supposed to keep the Asian carp out of the lake.

The "Asian carp" tag refers to four species of the exotic fish that were imported in the 1970s primarily to help control algae growth in fish rearing ponds in the southern United States. When floods washed the carp out of the ponds and into the Mississippi River system, their march toward the Great Lakes was on in earnest.

Asian carp include grass carp, black carp, and the silver carp notorious for their frenzied aerial explosions made famous by YouTube videos. Frightened by the sound of boat motors, the silver carp leap in numbers and have injured boaters and damaged equipment. They can reach about 20 pounds in size.

The otherworldly looking bighead carp can grow to 100 pounds and are common at 40 pounds in areas where they exist. Bighead and silver carp are considered very serious threats to the $7 billion sportfishing industry on the Great Lakes and the estimated 800,000 jobs it supports.

These carp are prolific breeders that can overwhelm the ecosystem with their numbers, and they now dominate the waters in many sections of the Mississippi system. They are filter feeders that consume massive amounts of plankton, essentially eating away the foundation of the food column and choking out native species.

"This latest news is just another alarm going off, telling us we've got to do something," Unger said. "If they get in and get established, it could devastate the economy of the lake."

A recent round of samples from the Chicago canal system taken under the supervision of the Army Corps of Engineers produced a spike in the number of positive hits for the presence of silver carp eDNA. Seventeen of the 114 samples or about 15 percent yielded Asian carp eDNA, a significant jump from the 1.5 percent positive rate from earlier tests.

The Army Corps of Engineers, which was been charged with studying the Asian carp threat to the Great Lakes and proposing long-term solutions, has maintained that there are a multitude of ways for Asian carp DNA to enter that waterway, thus producing positive hits. They contend that the carp eDNA could be present in bird excrement, contaminated bilge water, or residue from Chicago area restaurants that serve the fish, a popular part of Asian cuisine.

"eDNA indicates simply the presence of DNA, but what we don't know is all of the other things behind that," said Kelly Baerwaldt, eDNA Asian carp program manager for the Corps on Thursday, before the Lake Erie news broke. "It doesn't necessarily mean there is a fish there."

The potential scenarios laid out by the Corps would seem highly implausible in an examination of the Asian carp eDNA from the tests on Lake Erie, Jerde said.

"None of those alternatives appear to hold up in these latest cases," he said. "We're not looking at the end here, because at this point we don't know how many fish might be out there, but this certainly should increase the sense of urgency in every corner."

Kristy Meyer, director of agricultural and clean water programs for the Ohio Environmental Council, said the slow pace of response to the Asian carp threat on the federal front has been especially troubling.

"What's really infuriating is that we've known about these dangerous invasive fish for many years, and nothing substantial has been done. They've done study after study and talked about it endlessly, and now we likely have confirmation of live Asian carp out in Lake Erie," she said.

"It's scary, but nobody knows what happens now. What we do know for certain is that these fish are moving a lot faster than the Army Corps of Engineers."