Laudato Si’ called the Catholic community to an ecological conversion, a reorientation of our habits of mind toward a deeper consideration of creation and our responsibilities for its care. Is this a radical innovation? Or can we discern an intellectual patrimony at the heart of the discussion? In this lecture, Christopher Thompson invites us to reflect more deeply on the elements of ecological concern and consider the intellectual tradition inspired by St. Thomas Aquinas as a resource and guide going forward. “Green Thomism,” Thompson proposes, opens a path toward a renewed engagement with the Thomistic tradition as well as its contribution to contemporary ecological concern. Open to the general public.… 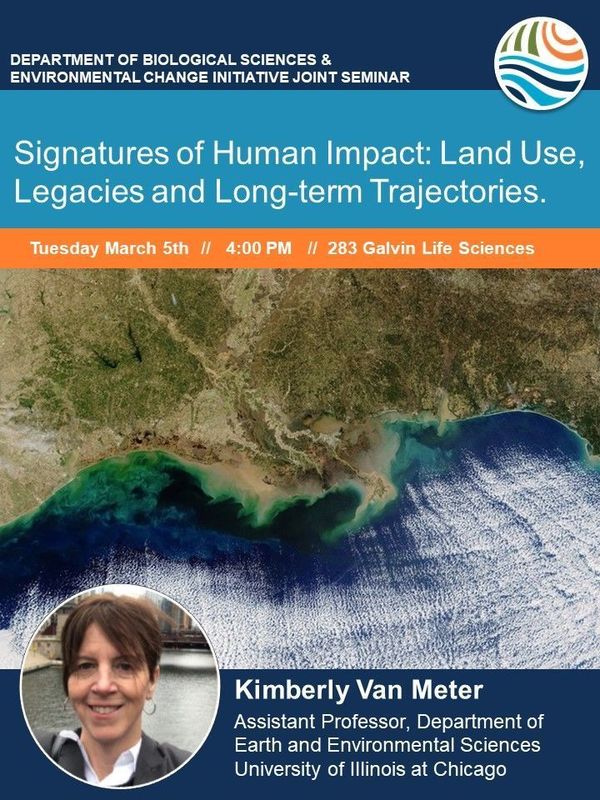 Rivers are known to be powerful integrators of the landscape.  Biogeochemical processes in rivers are, at any point in the stream, understood to be the sum effect of not only all inputs and retention mechanisms within the upstream catchment, but also the intertwined geomorphologic and anthropogenic factors that slow or expedite the flow of water and contaminants across the landscape.  In my work, I expand this idea of the river as spatial integrator and suggest that watersheds must also be seen as temporal…

Title: Nothing to Fear: Environmental Change in the Absence of Large Carnivores. 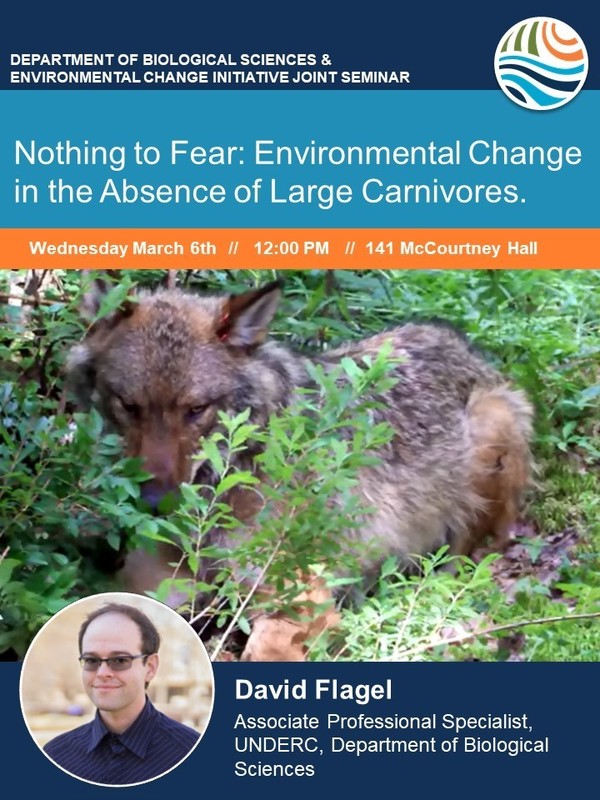 While often treated as more of an aesthetic or ethical issue, widespread reductions or eradications of large carnivores have led to substantial environmental change in many systems.  While we tend to focus on the obvious effects of reduced prey mortality, the reality is the much greater impact may be the loss of fear.…

Welcome to the Anthropocene. For the first time, fossil fuel-burning humans have become the prime drivers of the planetary climate. We have left behind the relatively stable pattern of natural variability that governed the environment in the Holocene epoch, beginning some 11,700 years ago. How do we adapt to our strange new planet? What kinds of ideas and values should we carry with us from the Holocene?… 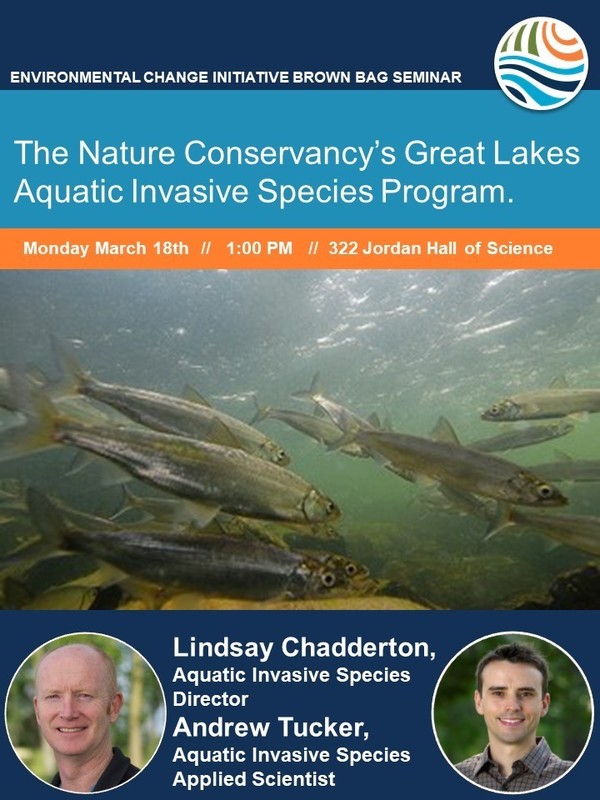 The Laurentian Great Lakes are one of the most heavily invaded freshwater ecosystems in the world. Food webs are dominated by non-native invasive species, ecosystem services and functions have been altered, and hundreds of millions of dollars are spent each year to manage and prevent invasive species impacts. The Nature Conservancy’s Great Lakes Aquatic Invasive Species (AIS) program is a comprehensive set of science-based strategies that are meant to contribute to the shared regional goal of managing AIS at each phase in the invasion process. We will provide an overview of the portfolio of projects that we are working on to prevent novel species introductions, detect and respond to nascent introductions, and control existing populations of AIS. Particular attention will be given to our projects related to early detection survey design and implementation (including the collection and screening of environmental DNA for AIS surveillance) and control of established invasive species on native fish spawning reefs in northern Lake Michigan.…

The Center for Informatics and Computational Science invites you to attend Jeffrey Shaman’s seminar entitled, “Forecasting the Growth and Spread of Infectious Disease Outbreaks” on Wednesday, March 20, 2019, from 4:00 – 5:00 PM, 102 DeBartolo Hall. Shaman is an Associate Professor at Columbia University.… 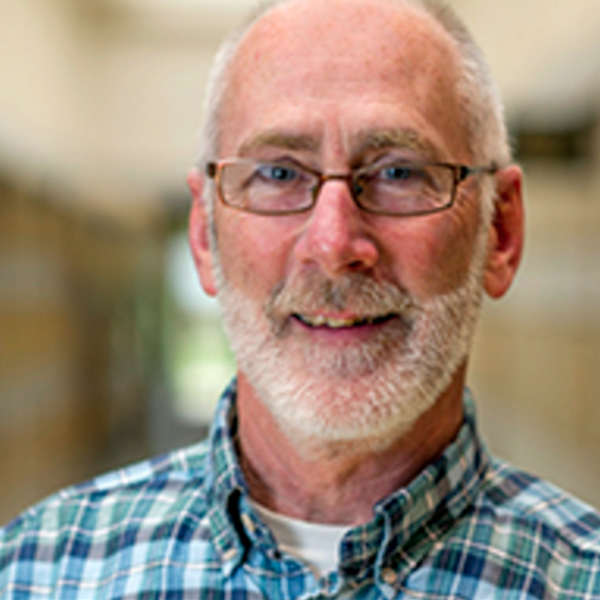 Patrick Regan is a professor of Political Science and Peace Studies and the Associate Director of the University of Notre Dame Environmental Change Initiative for ND-GAIN, a university effort that seeks to understand the effects of climate change through a lens of human social adaptation.… 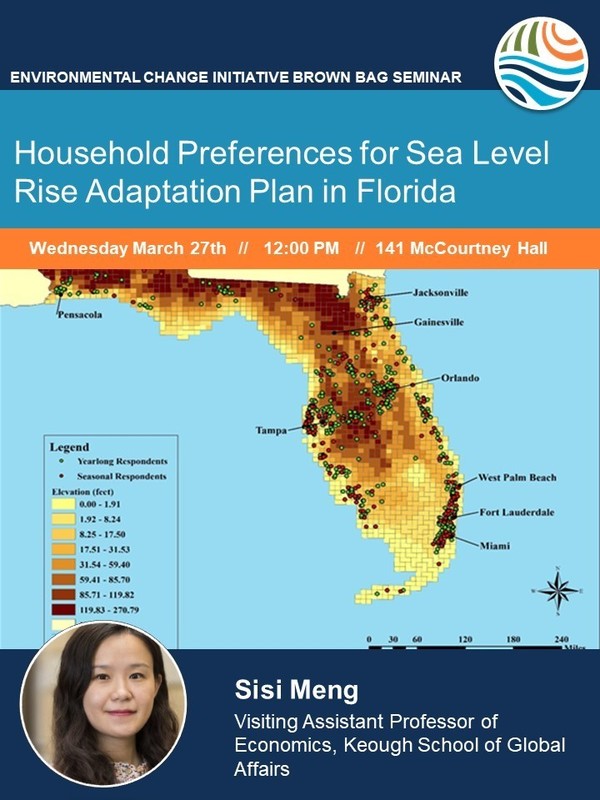 Abstract: Accumulating evidence indicates that global sea levels have been rising at an accelerating rate. This trend, linked with global warming, is posing a great risk to the communities living in the low elevation coastal areas. Florida is particularly vulnerable to the effects of sea level rise (SLR) due to its low topography, porous geology, subtropical climate, and densely populated coastal counties. This study aims to understand public preferences and produce estimates of economic value for sea level rise adaptation projects. Specifically, a series of choice experiments embedded in a household survey of Florida’s selected communities were used to: 1) examine the determinants of households’ preferences for short term adaption plans and long term adaptation plans; 2) identify the spatially heterogeneous preferences in household choices, by incorporating detailed spatial information generated by Geographical Information Systems (GIS) into the survey data; 3) investigate the differences and similarities in perceptions and preferences among Florida’s yearlong and seasonal residents. The empirical results can provide important inputs to the design of optimal adaptation plans and mitigation policies to avoid risks posed by climate change-induced sea level rise.…