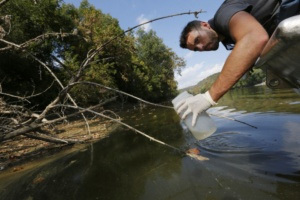 McCONNELSVILLE, Ohio — The muddy waters of the Muskingum River will give up spotted bass, smallmouth bass and catfish to the fisherman who knows where to cast his line.

But a team of Ohio wildlife officials and research biologists spent three days on the river last week searching for something they hope they never see there — a voracious invader that would spell the end of the Muskingum’s native wildlife.

No one has reported seeing or catching Asian carp in the Muskingum, but the fish has been found in the Ohio River near Portsmouth, about 100 miles west of their confluence.

“This sampling will help us understand whether there’s been movement into the Muskingum River,” said Rich Carter, the Ohio Department of Natural Resource’s fish-management and research administrator.

Carter guided a motor boat into small eddies along the banks of the Muskingum outside McConnelsville, where Andrew Tucker scooped river water into 2-liter sample bottles.

“This is where you find the most DNA,” said Tucker, an invasive-species ecologist with the Nature Conservancy.

The bottles are the first step in a genetic test that can detect specific strands of DNA in floating bits of carp tissue and mucus.

Positive test results indicate that Asian carp might be present.

The carp out-compete native fish for food. After escaping fish farms during massive floods in 1993, they now dominate several stretches of the Mississippi and Illinois rivers.

They are deemed a dire threat to the Great Lakes, including Erie, where an $11.5 billion tourism industry is at stake.

Environmental DNA tests there have returned some positive samples for Asian carp, but searches have yet to detect live fish, Carter said.

The Muskingum is the farthest east that Ohio officials have searched for carp. The results of these DNA tests are important for different reasons.

For state officials, the tests will help them devise plans to cut off two Muskingum River system pathways the carp could use to invade Lake Erie.

Carter said the fish could use the Erie Canal in Akron to reach the Cuyahoga River, which flows to Lake Erie. A flood in Medina County also could help the fish cross from the Muskingum’s headwaters to the Black River, another Erie gateway.

John Stark, the Ohio Nature Conservancy’s freshwater-conservation director, said the carp are a threat to the Muskingum’s rich population of mussels, which include the federally endangered fanshell and purple catspaw species.

The Muskingum Watershed Conservancy District provided a $46,000 grant to help fund the research. Conservancy officials are concerned about 10 reservoirs they oversee in eastern Ohio.

“More than 5 million people annually visit these (reservoirs) for some type of recreation, including fishing,” said Darrin Lautenschleger, a conservancy spokesman.

The research team took 210 samples, from the Muskingum’s headwaters to the mouth of the Ohio. It will take months to filter the water and analyze the samples for carp DNA.

Stark said the results will be useful, even if no carp DNA is detected. “You want to be out in front of them.”