The John J. Reilly Center for Science, Technology, and Values at the University of Notre Dame is pleased to announce its new director, Dr. Anjan Chakravartty. 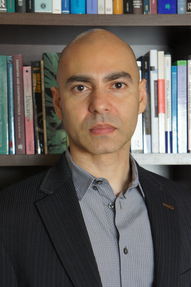 Dr. Chakravartty, a distinguished philosopher of science, joined the Notre Dame faculty in 2011 from the University of Toronto, where he was director of the Institute for the History and Philosophy of Science and Technology. He is currently a professor of philosophy and the editor-in-chief of the journalStudies in History and Philosophy of Science. Chakravartty’s book, A Metaphysics for Scientific Realism: Knowing the Unobservable, won the Canadian Philosophical Association’s biennial book prize in 2009.

Chakravartty takes over the directorship from Dr. Don Howard, also a professor of philosophy, whose tenure as director saw several new and exciting projects and changes in the scope of the Center. His predecessor, Gerald McKenny, recognized Howard for his service at the Spring Reilly Fellows meeting, acknowledging his distinguised service and thanking him "for fulfilling in a truly extraordinary way a vision previous directors and fellows had always hoped the Center would realize. The remarkable things that the Center has accomplished over the past three years are due to the abundant talents and strenuous efforts of many people, but Don has provided the leadership and created the opportunities that have enabled these talents and efforts to flourish."

Chakravartty will take over the directorship of the Reilly Center on July 1, 2014.

To learn more about the Reilly Center, go to reilly.nd.edu