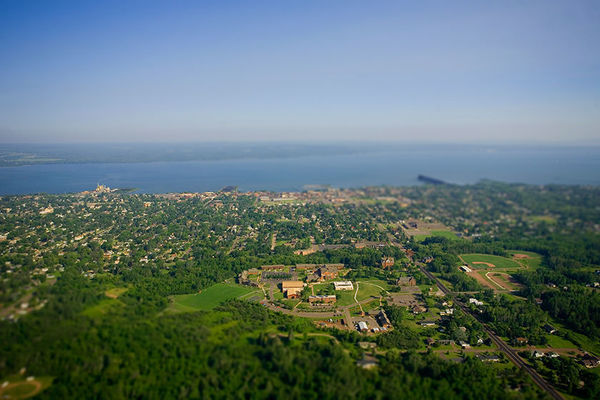 Posted by Northland College:
National journalist, research scientist to codirect new freshwater center - Northland College awarded $10 million endowment
ASHLAND, Wis. — Northland College in Ashland, Wis., has hired journalist and author of “The Great Lakes Water Wars” Peter Annin and Dr. Randy Lehr, to codirect a new center devoted to freshwater issues.
Annin has been the managing director of Notre Dame’s Environmental Change Initiative since 2010. He will start in August. Lehr has been a professor and director of the Ecological Solutions Initiative at Northland College since 2010.
“The goal is to shed light on research, innovations, solutions and policies around the many and evolving issues related to water,” Annin said. “This is an exciting opportunity to work in a place that I love — the Lake Superior region — on a subject that I am passionate about.”
The Mary Livingston Griggs and Mary Griggs Burke Foundation in St. Paul last month awarded the College a $10 million endowment to create the Mary Griggs Burke Center for Freshwater Innovation — where arts, science and the environment will merge at the family’s former 1902 country retreat and summer home, named Forest Lodge.
The U.S. Forest Service has owned and administered Forest Lodge since 1995. Northland College and the Chequamegon-Nicolet National Forest are working in partnership on finding the best uses of the property for scientific and educational purposes.
“The Center’s activities — both at the College and Forest Lodge — will focus on water and environmental science, communication and education, and leader summits and symposia to advance policy and behavior change,” said College President Michael A. Miller.
“Northland’s mission is to foster the next generation of environmental leaders and this will be an added tool to do so — it will expand our reach, enrich our programs and give us a national voice on these issues,” Miller said.
Forest Lodge is located 40 miles south of Northland College and Lake Superior, the world’s largest body of fresh water, and in the heart of Wisconsin and Minnesota lake country. The Foundation will provide Northland College with an additional $305,000 in start-up funds to hire, staff and develop programming.
“It is an amazingly beautiful property that — with Randy and Peter’s vision and direction — will validate and inspire the next generation of leaders as well as the world’s experts,” Miller said.
In addition to codirecting the Center, Annin will write, speak and teach courses and workshops. Annin is an accomplished journalist of 25 years — including 11 years at Newsweek and more than a decade as associate director of the Institutes for Journalism & Natural Resources. In 2006, he published “The Great Lakes Water Wars,” a definitive work on the Great Lakes water diversion controversy.
Professor Lehr will teach and oversee the development of science and applied research programs at the Center. Lehr’s work focuses on the linkage of science and policy to support the sustainable use of freshwater.
Lehr and his staff are currently leading a series of projects focused on climate change adaptation research in Chequamegon Bay in Lake Superior and the integrated assessment and management of inland lakes and streams.
“The work of the center will evolve over time in response to emerging issues,” Lehr said. “But the long-term vision is to integrate research and education, such that we train future leaders, shape policy and inspire action toward the protection and restoration of freshwater resources throughout the world.”
The College has a long-standing partnership with the Burke family and the U.S. Forest Service in regards to Forest Lodge, a sprawling 870 acres of second growth forest that includes one island and several log buildings. The Forest Service has owned the property since 1995.
“We look forward to preserving and becoming part of the legacy of the Burke family, and in doing so plan to benefit students, community, freshwater and the region,” Miller said.