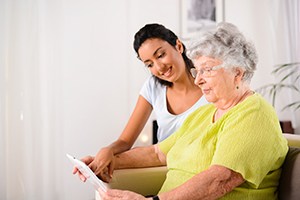 As health apps and wearable technology devices like Fitbits inundate the market, there’s one population that has been largely ignored, says a University of Notre Dame researcher. Director of the school’s Interdisciplinary Center for Network Science and Applications (iCeNSA) Dr. Nitesh Chawla is going against the current, targeting seniors with an app to help them ride the health technology wave.

“But what makes our app is different is, more than just collecting data, we try to build a socio-ecological model around the senior,” says Chawla.

The app includes social networks, the ability to compete against others playing the brain games, earn “badges” and share successes with others using the technology in their community.

“Physical and mental health, social networks, a sense of community, overall wellbeing—these are all facets of successful aging,” says Chawla. “We’re trying to integrate all of that and personalize it to that individual’s health and wellness goals, aspirations and spiritual goals. We want to help them build a complete wellness plan that helps them achieve their unique goals.”

Helping seniors adapt to the mobile technology was the initial hurdle to clear when the team launched the first of two pilot studies. After realizing how much the app intimidated residents, Beacon Health System Community Benefit Investment Coordinator Kimberly Green Reeves says they had to first teach them how to use the tablet.

“We had to back up and create workshops where they could first learn the basics,” says Green Reeves. “We assumed everyone could use a touch screen, but that’s not the case. Some seniors needed a stylus, and for some, just keeping it charged was new to them.”

Local high school students worked one-on-one with the residents to teach them how to use the tablet and interact with the app. Green Reeves says the seniors gradually learned the skills, and she noticed a sense of empowerment among them.

“Something that was so intimidating before then became this sense of, ‘I can do this,’” says Green Reeves. “It’s also a conversation starter when they’re talking with their physician. It helped the approach be not so much, ‘You should be taking your meds because you know better,’ but ‘Why aren’t you taking your meds? I see you felt sick that day.’”

It also gives seniors a direct line to their doctor, nurse or resident life administrator through a text messaging or voice recording feature. While the app isn’t meant to replace the presence of the homes’ staff, it helps them check in on residents when they can’t physically be there.

“On a daily basis, the resident life administrator or nurse can log on to a web portal and see the cohort they manage and what’s going on with them that day,” says Chawla. “Did they miss their medication? Have an episode of high pain or sleep issues? That information allows them to intervene or circumvent issues much sooner, ultimately impacting the cost of care and improving their quality of life.”

Of the 16 seniors who participated in the first pilot study, 10 elected to continue with the second phase, now underway. Chawla says the app is designed to, eventually, connect with wearable health devices, but he plans on it being “a slow and steady introduction” to avoid overwhelming the seniors.

“Even if we make a difference in just 10 percent of the population, I’d feel like we made a difference in society,” says Chawla. “Ten years from now, people who are 45 will be 55, and they will have an expectation of technology already. We’re getting ready for that next wave.”

Chawla says the studies will help “scale up” the technology and put him on “the last mile” of research’s grand challenge: taking ideas from the lab to society—in this case, a segment of society that has yet to harness the power of technology.

Originally published by Kylie Veleta at insideindianabusiness.com on January 28, 2016