Title:  Natural hazards and internal migration in Bangladesh:  The role of transient versus permanent shocks. 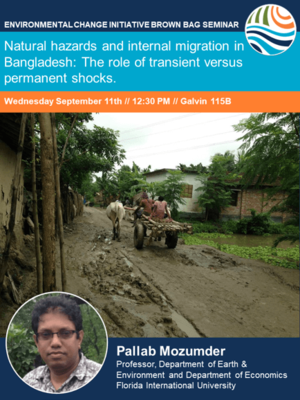 Abstract:  We examined whether ﬂoods and cyclones, which can be considered as transient shocks, aﬀect inter-regional migration differently compared to riverbank erosion that causes loss of lands and thus generates shocks that are permanent in nature. For our investigation, we tracked the 2000 Household Income and Expenditure Survey participants in nine coastal districts in Bangladesh and collected further information in 2015. We model migration on natural disasters and a range of household level variables. Our ﬁndings suggest that both transient and permanent shocks induce households to move to nearby cities but the eﬀect is much higher for the latter category. Comparing income and expenditure of migrant- and non-migrant households in a matched diﬀerence-in-diﬀerences setting, we ﬁnd that the former group is better-oﬀ relative to their counterparts, indicating that welfare can be improved by facilitating migration. Rising exposure to climate change induced natural disasters around the world imply that our ﬁndings will be increasingly relevant for designing policies to address vulnerability in disaster-prone countries with weak social safety nets.